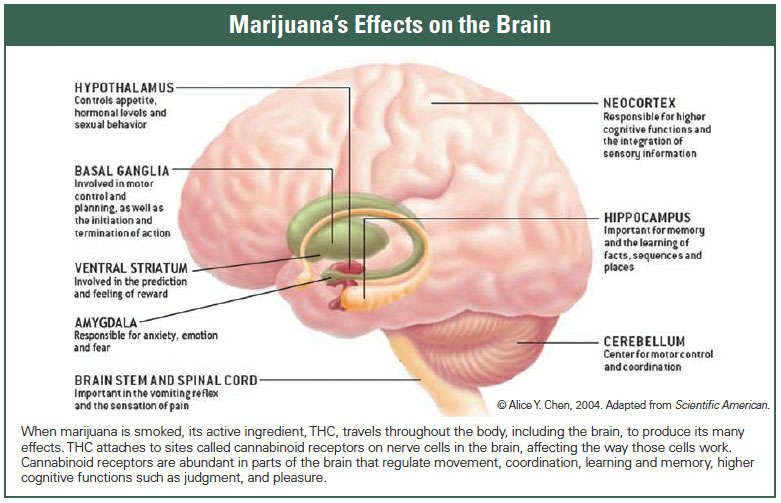 Top 5 Important Things to take away

What part of the brain does smoking affect?

Weed affects CB1 and CB2 receptors throughout the body. They are involved in many functions in the body including mood and immunity.

exhibited a deficit in cognition but that this was reversed when consumption ceased. In other words, the cognitive deficit only lasted so long as they were somewhat intoxicated.

Harvard Researcher Harrison Pope found that smokers had difficulty especially with verbal memory up to two weeks after ceasing marijuana use, but that this was completely reversed after two weeks. As we know, marijuana can be detectable in the blood and urine for up to a month.

A study done in  2014 which appeared in the Proceedings of the National Academies of Science, found: “ “The results showed that compared with controls, marijuana users had significantly less bilateral orbitofrontal gyri volume, higher functional connectivity in the orbitofrontal cortex (OFC) network, and higher structural connectivity in tracts that innervate the OFC (forceps minor) as measured by fractional anisotropy (FA).”

It’s clear that heavy weed smoke can change the brain, but the significance of this is not yet known. Users had reduced volume in one place but greater connectivity in other places, this should be expected.

A 2016 review entitled Adverse Health Effects of Marijuana Use studied adults who had begun smoking weed as children and had decreased brain connectivity in specific areas of the brain.  The precuneus was affected, a part of the brain involved in alertness. There was reduced connectivity in the prefrontal cortex which controls executive functioning. They found many of these changes were reversible after 4 weeks of abstinence.

Lastly, many studies over several decades link smoking marijuana in childhood with the onset of

psychotic disorders like schizophrenia. Marijuana is not for kids. 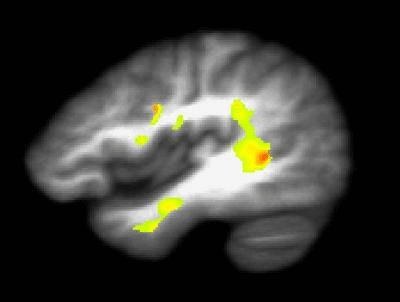 A 2017 study done in Nature showed that a chronic low dose of THC helped old mice to perform up to the level of young mice cognitively. And this result was even duplicated in humans. The THC would hinder the young people but improve the abilities of older clients in the study. It is therefore important to understand recreational cannabis use should be limited to adults.

Can weed make you stupid?

According to the studies, if you never stop smoking it, it can make you lose a few IQ points stupider than you might normally have been, but if you stop, this should resolve within 4 months.

Does smoking cannabis cause brain damage?

Smoking weed will change your brain. Any drug you do, such as caffeine which has as a big effect on your overall functioning will likely change the brain. We have not yet known it to be the case that weed causes any significant brain damage.

Can weed cause psychosis?

The biggest risk of weed is that it will cause the onset of psychosis in susceptible individuals. Some people have a type of mind and of developmental trauma such that they are just on the edge of developing a schizophrenic type of mind. Many studies have shown that weed can be the trigger that pushes them over the edge into full-blown schizophrenia with attendant hallucinations. This claim is however controversial because it’s not clear if the weed is causing schizophrenia or if the person is trying to medicate symptoms that are already present by smoking weed and also cigarettes.

A meta-analysis was undertaken to try to answer this question. Published in JAMA in 2011, scouring many studies and using analytical methods to data-mine and combine the implications of each study, they concluded that smoking marijuana in childhood did contribute to the later development of psychotic disorders. These are disorders marked by the presence of hallucinations which may be auditory or visual.

However, for the average adult user of cannabis, this is not a concern. Adults should make sure children are not using marijuana or marijuana products.

The studies have shown that weed will lower IQ for up to two weeks after the last toke. After that, IQ goes back to normal.

The studies show that if children smoke weed for recreational rather than medical purposes during adolescence, it can cause behavioral problems and cognitive deficits.

For the average adult, using weed recreationally is not associated with any form of brain damage. Weed, used in moderation can have anti-inflammatory and neuroprotective properties as well. Good luck and have fun.
Disclaimer: Nothing said here is a replacement for your doctor’s advice about medical marijuana. Always consult your doctor to get information about the medicinal use of cannabis.

1 thought on “How Many Brain Cells Does Smoking Weed Kill?”